BLSJ, NJBA and NAHB fight for its members at the Statehouse in Trenton, on Capitol Hill in Washington D.C., and in the communities where they do business.

We work hard to defeat excessive regulations and to protect our members’ bottom lines. Our advocacy efforts include educating policymakers and the Administration, building successful coalitions, and mobilizing our membership’s grassroots on a range of issues.
SECOND QUARTER 2022 UPDATE

NJBA Discusses Transformer Issues and Delays with PSE&G, Governor's Office and BPU
The New Jersey Builders Association (NJBA) has been made aware that many builders in the PSE&G service territory are experiencing delays and potential delays due to the utility company's difficulty procuring transformers.

As such, NJBA has been meeting with PSE&G to discuss workable solutions to prevent future delays. NJBA has also met with members of the Governor's Administration and officials at the Board of Public Utilities (BPU) since the transformer issue has the potential to cause major disruption in economic growth. All parties have open lines of communication and have expressed interest in finding a solution as soon as possible

The Builders League brought this issue to the attention of the National Association of Home Builders (NAHB) Building Materials Working Group after builder members alerted the League to this major problem.

Emergency PACT Rulemaking Delayed
NJDEP to Use Emergency Powers to Adopt Climate Change Rules for Development
In a surprise announcement at a small industry stakeholder meeting on May 25, the Department of Environmental Protection (DEP) announced it would be taking the dramatic step of deviating from its previously reported rulemaking timeline and would be adopting a portion of the Protecting Against Climate Threats (PACT) rules under its emergency rulemaking powers in June.

However, DEP has indicated it has delayed the filing of the emergency rules. It intends to hold additional stakeholder sessions and will proceed with the emergency rulemaking this summer.  As the New Jersey Builders Association has alerted the members over the past couple of years, the PACT rules will have a drastic impact on development in NJ, impacting everything from the Coastal Flood Hazard, Fluvial Flood Hazard, Wetlands, Coastal and Stormwater Rules. Read the full NJBA Alert here.

Dirty Dirt Legislation Advances
S-2870 (Smith), was released from the Senate Environment Committee this week and awaits consideration by the full Senate, while it's Assembly counterpart A4255 (McKeon), awaits consideration by the full Assembly. The bill would extend the registration deadline in the Dirty Dirt law from April 20, 2020 to July 14, 2022.

The bill would also require the DEP to adopt rules and regulations to implement the law and require any person that registers with the DEP to apply for a soil and fill recycling license no later than 30 days after the DEP adopts rules and regulations, rather than by October 17, 2020, as is provided in current law.
NJBA supports this legislation which provides time for businesses to register with DEP while also requiring rules are published prior to requiring those businesses to apply for a full license.


Assembly Committee Amends Home Improvement Contractor Licensing Bill
The Assembly Consumer Affairs Committee took testimony and amended A2138 (Moriarty), which would establish a board of home improvement and home elevation contractors to establish the rules and procedures for contractors to obtain and maintain licensure in NJ.

NJBA has been working with the sponsor and the committee to ensure only qualified professionals are performing home improvement work and is pleased that robust amendments were made in committee, as such, NJBA supports the bill as amended. The bill awaits further consideration by the Assembly committee and additional action is expected in the fall.

Assembly Committee Amends Stranded Asset Conversion Bill
The Assembly Housing Committee discussed and amended A1294 (Greenwald), which would create a limited preemption from local zoning regulations for applications to convert vacant and underutilized office parks and retail centers into mixed-use developments. The measure would address the many large suburban professional office parks and regional shopping malls that have become underutilized, vacant, obsolete and have become "stranded assets."

NJBA strongly supports this legislation and believes it could create opportunities for symbiotic relationships between residents and the retail and office parks that are less attractive locations for workers and struggle with high vacancy rates. Th bill awaits consideration by the Assembly Committee and the Senate version of the bill S2103 (Singleton) awaits consideration by the full Senate.

Assembly Committee Advance Homeownership Incentives
The Assembly Housing Committee voted to release A2246 (Greenwald), which would provide a tax credit for home buyers against their gross income tax over three years; this bill also earmarks a portion of the appropriation for the purchase of newly constructed homes to stimulate economic growth. NJBA has continually advocated for the need to increase homeownership because of the multitude of benefits associated with it, including tremendous wealth growth, healthier communities, higher educational attainment for children, and more.

This bill and others answer NJBA's calls for first time homebuyer incentives and it will continue to strongly support any measure to increase homeownership in NJ. The bill awaits consideration by the Assembly Appropriations Committee.
Revises permitting thresholds for certain types of development requiring CAFRA permit from DEP. Passed Assembly 78-0 and awaits consideration by Senate Budget and Appropriations Committee. NJBA Supports A2676 (McClellan) with amendments

Lumber and Building Materials
• The price and availability of building materials, lumber in particular, remains a significant concern with shortages common and prices of many goods at or near historic highs.
• The lack of a U.S.-Canada softwood lumber trade agreement is further exacerbating price and supply challenges brought on by the COVID-19 pandemic.
• NAHB continues to work with the Biden Administration and Congress at the highest levels to address the ongoing building materials price and supply issues, and is ramping up to address tariffs as a whole. 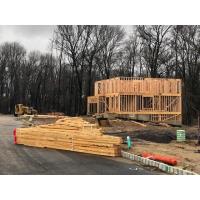